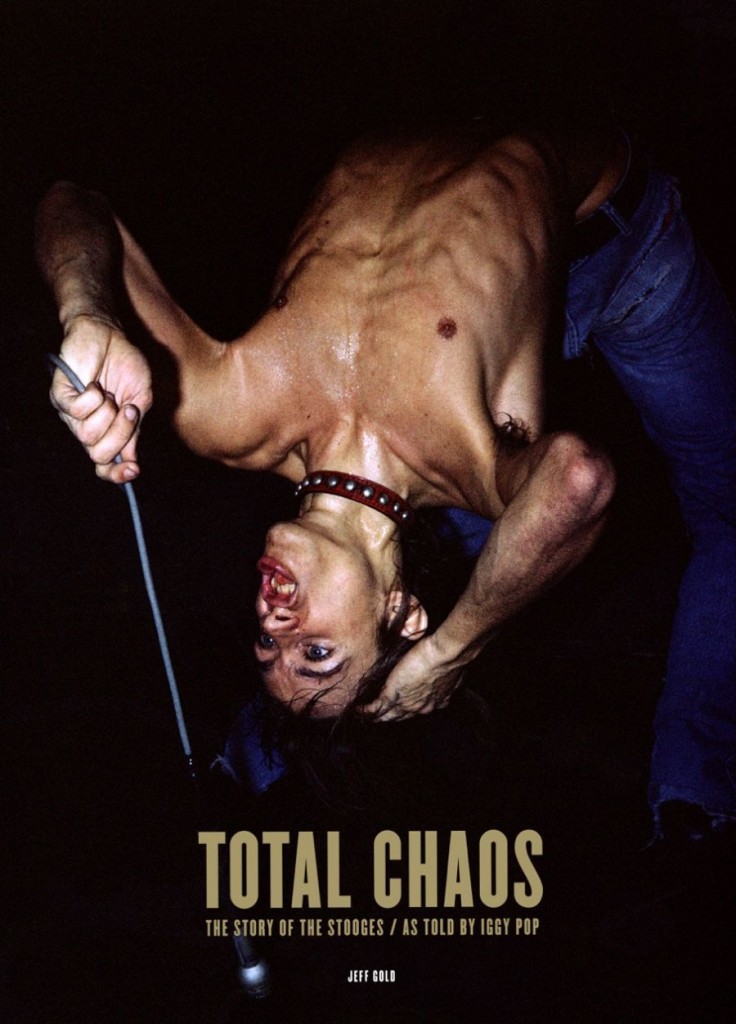 Third Man Books is excited to announce one of the most anticipated books of the year about one of the most influential bands of all time… The Stooges. TOTAL CHAOS: The Story of The Stooges / As Told by Iggy Pop is the first time the story of this seminal band has been told entirely in Pop’s own words.

Author Jeff Gold and contributor Johan Kugelberg, noted music historians and collectors, spent two days with Pop at his Miami home, sharing with him their extensive Stooges collection and interviewing the legendary singer. Pop’s candid, bare-all responses left them with the almost unbelievable tale of the band he founded-the alternately tragic and triumphant story of a group who rose from youth, fell prey to drugs, alcohol, and music biz realities, collapsed and nearly 30 years later reformed, recording and touring to great acclaim. In 2010 The Stooges, credited with having invented punk rock, were inducted into the Rock & Roll Hall of Fame. Their continuing influence can be felt today in the shape and sound of rock-n-roll music.

Jeff Gold, Johan Kugelberg and editor/contributor Jon Savage are among the most respected music authors and historians working today. Their efforts include numerous acclaimed and best-selling books and a Grammy Award. TOTAL CHAOS stands as a work for all fans of the band and rock music to draw inspiration. Including an absolute treasure-trove of rare and unseen photographs, TOTAL CHAOS is a book that shows AND tells the story of The Stooges. A metallic k.o. of only the best kind.

It was a rare privilege to sit with Iggy as he downloaded the story of The Stooges. He’s an incredible storyteller with a fantastic memory and a great sense of humor, and he held nothing back. The Stooges were pioneers in sound, look, and live presentation, and along the way invented a genre-punk rock-and influenced countless others that followed. There was no precedent in rock music for what they did. They’re definitely the only group in the Rock and Roll Hall of Fame who started out playing an amplified Waring blender, a vacuum cleaner, spring water bottles and a 200 gallon oil drum. – Jeff Gold, Author of 101 Essential Rock Records

Iggy and The Stooges have to be one of the greatest American rock bands that has ever been. – Joan Jett

What does it mean to be Iggy Pop, five decades of being ‘the wildest man in rock’? Iggy Pop is many things. Rock Star. Singer, Rebel. Primitive. Stooge. The Jean Genie, Passenger. Legend. – Johnny Marr

Iggy Pop has turned the interview into an art form. In this book he tells the history of The Stooges with a mixture of wit, candor and spontaneity: from their early beginnings to their full flaming flare over three groundbreaking albums before the crash and the triumphant return that no-one could have predicted. Profusely illustrated with dozens of unseen images, this is the story of The Stooges like you’ve never read it before. – Jon Savage, Author of England’s Dreaming.