Iggy And The Stooges ‘Gimme Danger’ Documentary To Premiere In Cannes

Jim Jarmusch’s documentary Gimme Danger, which looks at Iggy Pop and The Stooges, will premiere in a midnight screening, out of competition, at the Cannes Film Festival to be held May 11-22. More details on the 2016 films will be released a week before the festival.

View the official selections at Festival-Cannes.fr. 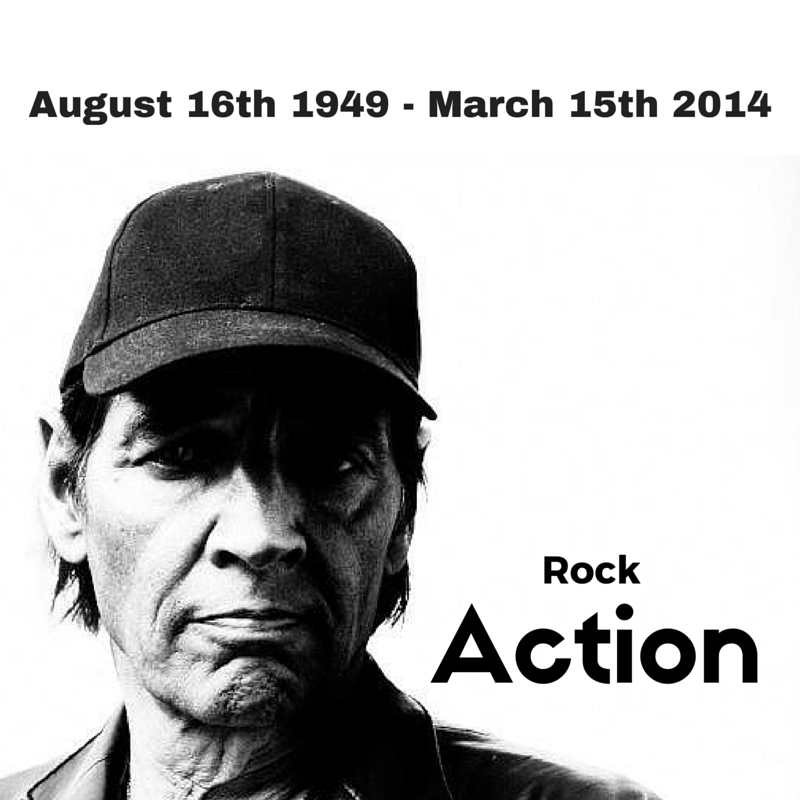 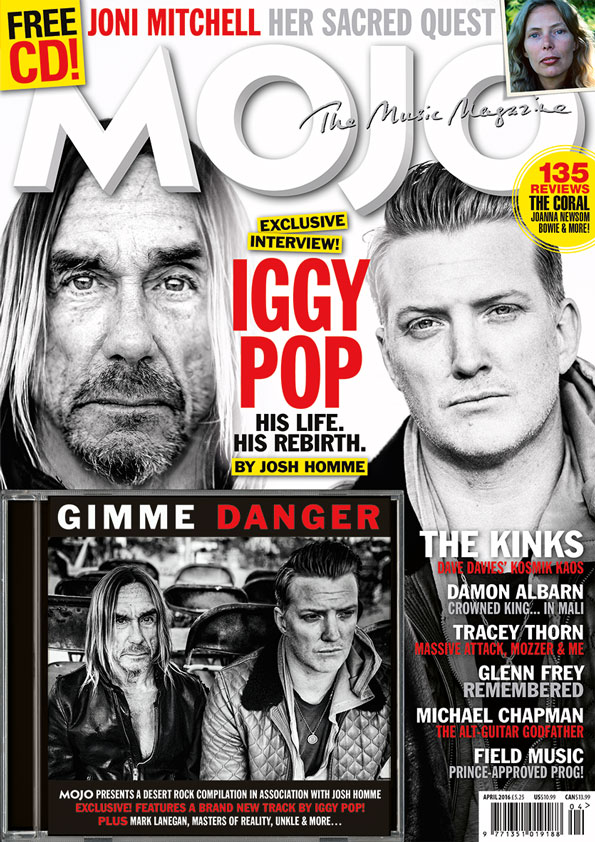 Iggy Pop is featured in a new cover story for the April 2016 issue of MOJO, in an interview that surveys his entire career. Speaking about his Stooges bandmates, brothers Ron and Scott Asheton, he discusses the relationships which fueled their creativity. “I was very much pursuing a brotherhood with them,” he said.

Read more at MOJO. The magazine is on sale now.

Iggy Pop On David Bowie: ‘He Resurrected Me’ – The New York Times

Iggy Pop, whose solo recording career began with two albums produced by David Bowie, said in an interview this week that he had still not fully processed Mr. Bowie’s death, at 69, on Sunday.

“The friendship was basically that this guy salvaged me from certain professional and maybe personal annihilation — simple as that,” said Mr. Pop, who is 68. “Only he was the one who had enough truly in common with me, and who actually really liked what I did and could get on board with it, and who also had decent enough intentions to help me out. He did a good thing.”

He added, “He resurrected me.”

David’s friendship was the light of my life. I never met such a brilliant person. He was the best there is.

The Stooges: 10 Of Their Best Songs – The Guardian

In honor of Steve Mackay, The Guardian has put together a list of what it considers to be 10 of the best songs by The Stooges. Do you agree with their list? Here is an excerpt about “1970”:

The riff gets stuck like a scratched record, the Stooges retracing its three notes endlessly, like cavemen caught in a loop, Iggy barking “I feel all right!” again and again, and over the top the newest introduction to the group – saxophonist Steve Mackay, who sadly died this week, and who’d joined the group two days before the sessions for Fun House began – bleated and raged and blew, infesting the song’s priapic stomp with seething free-jazz skronk. It’s debauchery pushed to a psychosis some way beyond excess, beyond enervation, beyond exhaustion. Indeed, if you find yourself repeating the phrase “I feel all right” this many times, with such strangled passion, over a rusticated, circular riff caught in an ever-decaying orbit, then the chances are you don’t feel very all right.

Steve was a classic ’60s American guy, full of generosity and love for anyone he met. Every time he put his sax to his lips and honked, he lightened my road and brightened the whole world. He was a credit to his group and his generation. To know him was to love him.

In the late 1960s, Iggy Pop had a problem. He was the frontman of a band — the Stooges — that would become legendary, but they weren’t legendary yet. … In an attempt to bolster his band’s already notoriously brash, confrontational sound, he hired saxophonist Steve Mackay. Mackay’s marching orders: … “I want you to play like you are Maceo Parker, but you took LSD,” Mackay, in an interview last year, remembered Iggy said. Mackay rose to the occasion.

“Music was everything for Steve,” his longtime companion Patricia Smith told The Washington Post in a phone interview. “He always had music in his head.”

“I never stopped learning how to play better and better,” Mackay said. “Or different and different.” – The Washington Post

He made other records and performed with a succession of different musicians, but none had the impact of the songs he recorded with the Stooges for their 1970 album Fun House. … He joined the re-formed Stooges in 2003, refusing to rehearse with the band before joining them onstage at Coachella. … Their reunion prompted a resurgence of specific interest in Mackay: as well as the Stooges, he played with Jarvis Cocker, formed an experimental band called Estel with latterday Stooges bassist Mike Watt and released several solo albums on which the sense of a musician with his willingness to experiment – the same impulse that had led him into the studio with the Stooges in the first place – still entirely intact, was hard to miss.
– The Guardian

In the end it would not be a stretch to call Steve the greatest rock and roll sax player of all time. He was the first to combine the raucous sound of early rock and roll with the freedom and joy of free improvisation, all the while playing each note with total focus. Nobody has surpassed his approach. I’m proud to have known Steve and humbled to have been able to share the stage with him hundreds of times over the years. He always surprised us. – Brian Ritchie, Violent Femmes

RIP Steve Mackay. He was an inspiration to me since my teenage years and “Carnal Kitchen”. It was a great privilege to know this gentle, kind, yet powerfully independent soul. His music, and its impact on so many of us, will live on. – Deniz Tek

Read more about Steve from:

Happy Birthday, Steve! Our thoughts and prayers are with you not only on this special day. There’s a lot of jammin’ to do!

Our fundraiser for Steve is still ongoing: http://www.gofundme.com/stevemackay. Thank you for your well wishes. 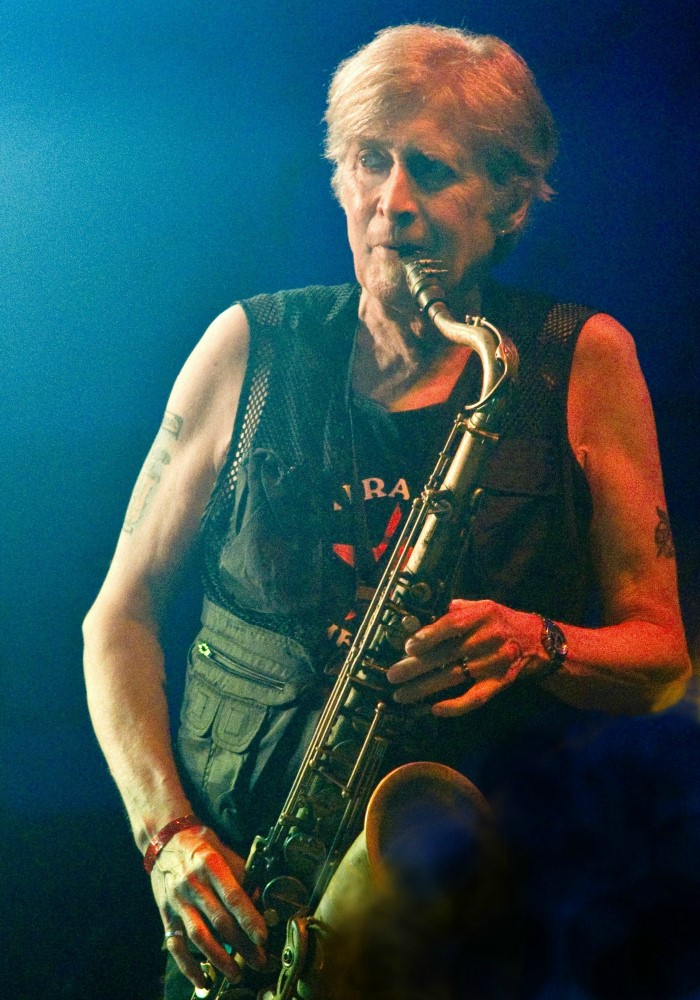 As you have probably heard, Steve Mackay needs us. He is still in hospital. Apart from your thoughts and prayers, we invite you to join this fundraiser: http://www.gofundme.com/stevemackay. Thank you for your love and support for Steve. As many of you know today would’ve been Scott Asheton’s birthday! Happy Birthday Scott, you are greatly missed by so many!

Raise a glass for Mr. Ron Asheton. Happy Birthday.
You are missed. The Stooges‘ debut album from 1969 didn’t even crack the Top 100 on Billboard‘s album chart, so it wasn’t like too many people were waiting for the follow-up. Which was just fine. Without expectations all that high, the band was free to explore almost any path it wanted to on Fun House.

…The result is one of the most primal and unhinged albums ever made. Saxophone player Steve Mackay, a temporary addition to the band who also came from the Stooges’ hometown of Detroit, blurts his way through songs in an acid-damaged take on free-jazz pioneer Ornette Coleman’s improvised soloing, pushing Fun House into a sort of avant-jazz proto-punk garage scuzz-rock genre all its own. …It’s also brilliant, a pre-punk milestone years ahead of the movement it unwittingly helped inspire.